Hey Y’all! This is what I (and I alone) refer to as a “vintage” Notorious Neon post. I wrote this back in 2017 right after seeing John Mayer in concert for the first time.

It also happened to be the third concert I had seen in three days (Kehlani and Tove Lo were nights #1 and #2). And it was the first of two times I would see John Mayer play within a month. The second time being my very first Dead & Co show – that was also a hell of an experience and I do have another “vintage” post I could bring back about that night. Stay tuned.

Anyway – I decided to bring this one back to the blog since I will be seeing John Mayer in concert again TONIGHT! Similar to this particular night back in 2017, I did buy my ticket to the show week-of and I can’t wait to experience what he has for us this tour.

I bought my ticket to this show – no – experience on an impulse. John is someone I’ve always wanted to see, but I’d already made plans to attend two concerts on the two nights leading up to his. Three shows in three nights? Who does that?

I didn’t even check to see if anyone was available/wanted to attend with me, I just bought the “best seat available” and prayed that didn’t mean I would get placed next to someone who wanted to sit down and be a bore the whole time. Spoiler alert: I got lucky in this department.

As I made my way onto the floor of TMobile Arena located in The Park behind New York, New York on Las Vegas Boulevard aka “The Strip”, I asked the usher if I was in the right section. (This was my first time attending a concert in the year-old venue, let alone stepping foot in the place.)

His eyes grew wide and replied “Ohhh no, you are allll the way up there” and points to the stage. My “best seat available” turned out to be eleven short rows back from the stage. Immediately, the most genuine smile began to appear on my face…I was not only going to witness thee one and only John Mayer, I was going to be able to actually see him during the show. I was going to be able to watch him play the guitar with all the fire and passion that can be heard on his live albums. I was going to witness a genius. 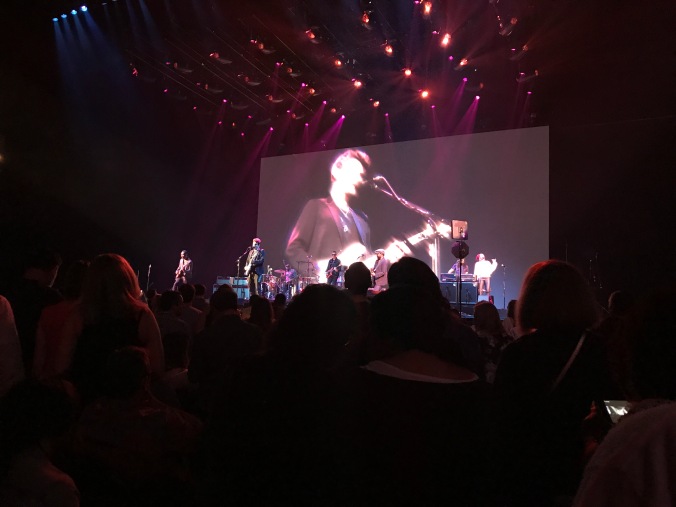 Opening for John was a band from L.A. called LANY. Before seeing them live, I had heard some of their songs and I’d also heard they sounded like bootleg The 1975. I found that they sounded pretty good and I was impressed by their musicianship. My seat mates and I did decide that the lead singer sounded very similar to the man of the evening himself, but also that, if we all weren’t at a John Mayer concert we probably would not have drawn that conclusion.

One set down, one more to enjoy.

Maker’s Ginger Ale in hand and quarter-life crisis in tow, I was ready for a man I’ve been singing along to and admiring the lyrics of for the last sixteen years (holy shit – didn’t realize the actual number prior to this). I remember only having a CD player in my car at the age of 15 and alternating “Continuum” and “Heavier Things” every time I drove.

There’s just something about “Clarity” and driving in the mountains.

There are so many sides and stories to John and his music. His decision to break the show up into “Chapters” featuring him and the band, him and his acoustic guitar, and the John Mayer Trio was effective and enjoyable. The audience was able to experience a range of songs, memories and skills from the musicians in front of us. I always knew John could play the guitar, but it wasn’t until he was actually in front of me, jamming out, feeling and believing in his music that I truly understood how much of musician he really is.

There’s just something about people who are so passionate about what they do, when they truly believe in it…it’s beautiful and it makes you want to be a part of it.

His set list ranged from “Why Georgia” up to “Love on the Weekend” with plenty of guitar solos in between. I could actually close my eyes and feel like I was experiencing something magical. (Even though I didn’t want to close my eyes because HELLO JOHN MAYER WAS DIRECTLY IN FRONT OF ME.)

I barely even had a desire to look at my phone or take any photos (maybe 3?) or videos (maybe 3?) because I was too busy living in the moment. Which makes for a less than spectacular recap of it all, I realize.

So my advice to you is, go see the man live in concert – if you can. I can honestly say it was bigger than a concert and now currently sits at the number one spot on the list of the “best concerts I’ve ever been to”…seriously.

Coming out of this whole thing, I feel so inspired in my life. To chase more, to be more, to do more. And to do it all authentically. Not to mention, I think it’s time to see John Mayer again. And maybe take more pictures?

Is this the part where I become a groupie?